I’ve had a month to come down from the high of running the NYC Marathon and I’m not quite sober yet. I’ve thought about the race a lot and talked with people about it, helping me relive some of the most special moments. I’m very grateful for that.

The final few weeks before the race were filled with anticipation, but also a certain degree of paranoia, making it unique from other races, even my first marathon. I mentioned before that I first applied to the lottery over three years ago and with such a long build-up I was worried that something would go wrong to prevent me from running. I never feel that way and I was trying to not freak out but it was difficult. So when I crossed the start line at the foot of the Verazzano-Narrows bridge, I felt incredible relief and joy. How did I get so lucky to be out here, basking in the sun, running through this city with all of these wonderful strangers? THIS city.

Having lived here for a short time, and having more recently immersed myself in the race’s history, it really did feel like home. Parts of it at least. The other parts were filled with new sights and sounds that made me want to come back again.

As I crossed the start line I felt really good, almost unstoppable. That feeling lasted about ten seconds until I tripped on one of the countless paper bags flying around. Had it happened a lot later in the race I don’t think I would have been nimble enough to stay upright. Soon after, a man was blown over in front of me. Needless to say the wind was a formidable obstacle on this day but fortunately it became much less of an issue after we descended the bridge and entered Brooklyn.

Seeing the first few faces in the crowd seemed to put a jump in every runner’s step. This is what we’d been hearing about, this is what we were waiting for. And it didn’t disappoint. The genuine enthusiasm of the New York Crowd was palpable, and very endearing. It wasn’t just in the signs or the cowbells; these people didn’t just stumble upon a race. They woke up early on a Sunday morning to stake out their spot amongst millions of others.

For me, there are two race highlights that stand out, and I remember them for their contrasting sounds.

The first was around the one third mark, entering the Orthodox Jewish area of Williamsburg. It’s the neighbourhood of Fred Lebow, the marathon’s first race director. In the 70’s he tried to get his community to buy-in to the idea of having the marathon pass through their backyard. Although he managed to gain approval, he never really gained their full support. Even in 2014, that reality is starkingly clear. This section of Brooklyn is a ghost town, with only a few passers-by in traditional garb along with the occasional supporter. The transition from loud to soft to loud again was striking, and a humble reminder that even though marathons are now very much a mainstream activity, there are still people out there who think we’re all crazy.

The second highlight came around the 15 mile mark on the Queensboro Bridge, and not for the reason many others cite. Turning off the bridge and into the roaring crowds of First Avenue was pretty spectacular but my favourite moment was traversing the bridge itself, taking in the views of Lower Manhattan and best of all, being alone again with just runners, thousands of them, and hearing nothing but footsteps and breathing, footsteps and breathing. As we began to descend someone let out a scream that echoed off the ceiling. Others followed suit and I felt a smile come over me, and I saw others smiling too. We were on our way.

Climbing 5th Avenue before entering Central Park for the last few miles was a struggle, so seeing friends at the top of the hill gave me a huge boost at just the right time. The rest of the race is a blur, but I remember how different the cool, bright, high sun felt from a few months earlier when I ran the same rolling hills under overcast, humid skies. Coming around the final corner and seeing the finish line ahead was almost hard to believe. More than most things I’ve done, it felt like the end of a journey. But it was a journey that had opened countless other doors along the way.

After the finisher’s medal was placed around my neck and after I finshed the march of death to retrieve my bag, I decided to walk back across 96th Street to the east side of the park to cheer on my friends and all of the other runners. Just be a spectator. After the initial elation subsided, it became a long, slow, cold, miserable walk. But once I exited and began to make my way across the park, almost every single person I passed congratulated me. They didn’t know me or what time I ran or what my placement was, yet they went out of their way to say nice things to me, a total stranger. It’s kind of crazy when you think about it, but it’s also the kind of thing that makes you want to keep going. In that particular moment though, I was simply overcome with an overwhelming sense of gratitude. THIS city!

Packaged picked up, shiny new shoes purchased and ready to run! Also, this was the biggest expo ever. 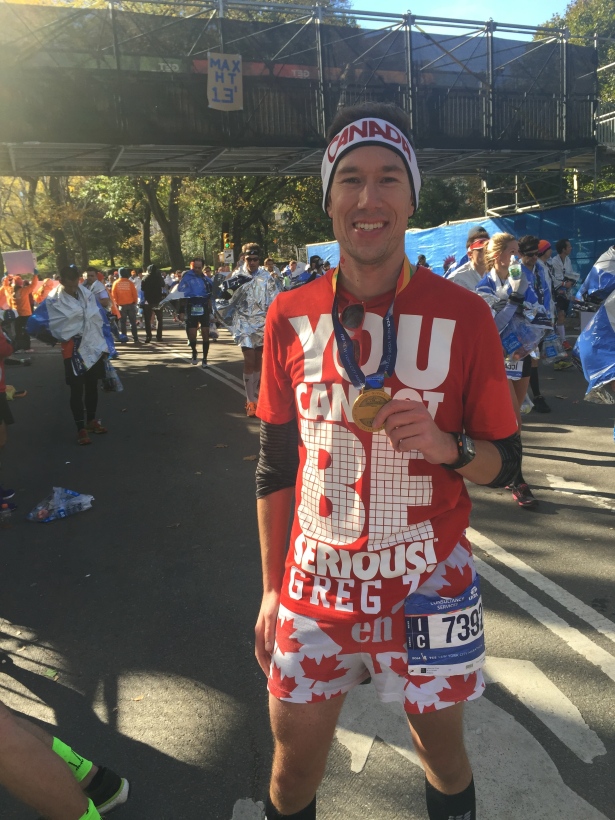 Soon after finishing, proudly displaying my medal and tribute to tennis legend and Queen’s native, John McEnroe. My favourite response to the shirt was a guy who yelled, “I AM serious, Greg!” 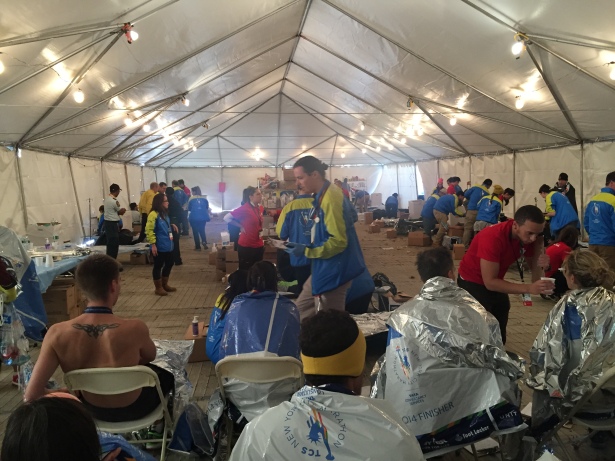 I managed to run 26.2 miles without taking a break but along the walk from the finish line to bag pickup a volunteer directed me to shelter. There was no room at the warming tent.

I got to play the roles of both competitor and spectator, and caught a glimpse of the one and only FLEX looking strong at mile 24. 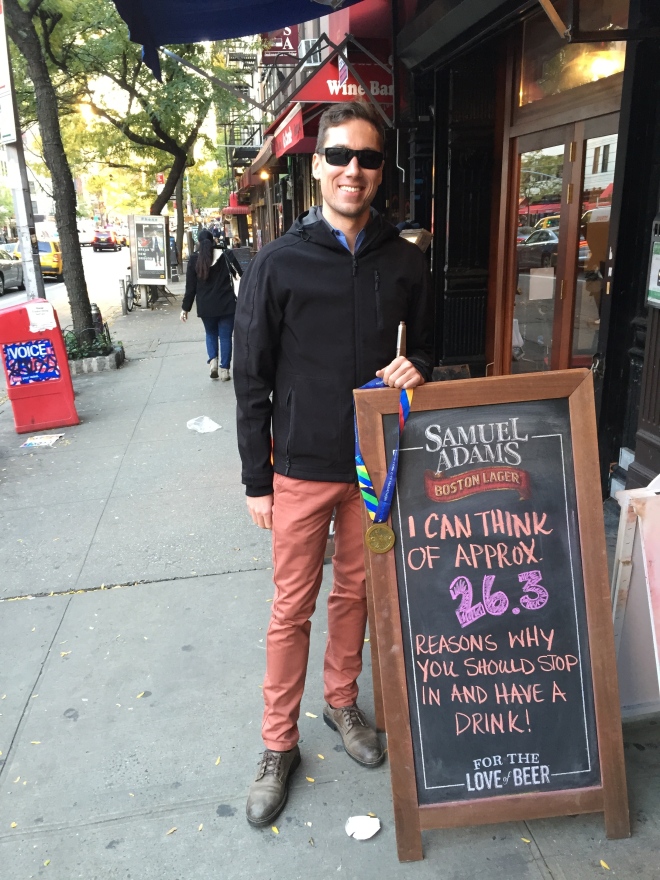 I shamelessly brought my medal everywhere I went and would place it on worthy signage.